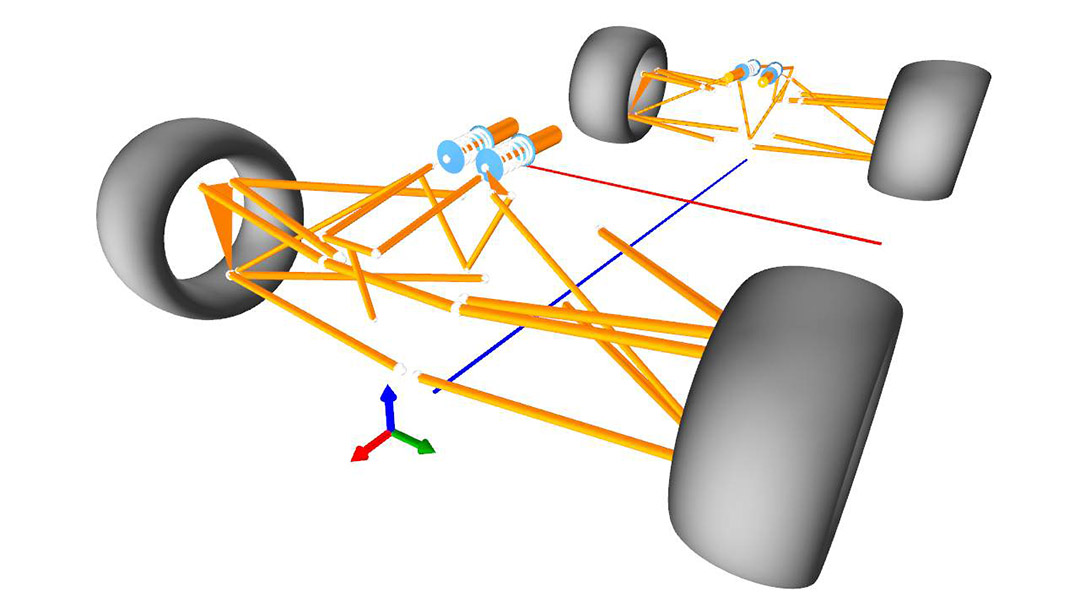 As with any aspect of vehicle analysis, simulation is a multi-faceted tool that is only as good as the user can make it function.  In addition to performing simulations that looks at how to achieve peak vehicle performance, a significant amount of effort needs to be directed towards how the vehicle can endure the loads being applied on the system, and what happens when things go wrong.  Understanding of design of a system comes in part from a well-set analysis of which components will face the most load and the circumstances under which those loads will be applied.

Using the new OptimumKinematics Forces Module, we will be able to consider a multitude of different load cases and determine with ease which components are being loaded the greatest, and the load case that should be considered the worst for each component.  This all allows a user to design their vehicle and ensure that not only are they able to run their car to peak performance, but also survive the full length of a race.

After defining the load cases and their accelerations and speed, we have to define the forces at each contact patch would produce, so that we can apply those forces in the simulation. Such forces could be calculated with precision using OptimumDynamics full vehicle model software, especially if we had complete tire models, coming from OptimumTire, for example. If the complete vehicle and tire models are not available, it is still possible to estimate what the forces at the contact patch are using simplified calculations, and this is what we will do in this case study using an Excel spreadsheet tool.

Figure 2 shows such tool, where we input the properties of our vehicle in the “Inputs” area at the top, and we define our load cases, by entering the desired accelerations and speed for each case, in the “Case to Calculate” area at the bottom, with each row representing a load case.

For each load case it will estimate what the forces and moments are in each contact patch, and body motion, according to the vehicle inputs, requested accelerations, load transfer, and downforce. The outputs for each contact patch can be seen in Figure 3, where each row represents a load case.

We now have the necessary inputs of force and motion and we can set and run the simulations including motion and forces.

Analyzing Results: Looking at What Components are Being Loaded the Most

We can analyze the results in form of tables and charts, with hundreds of outputs, or with a 3D visualization of the suspension movement and forces. In this case study, we will export the desired outputs from a table report and continue our analysis of factor of safety in an Excel spreadsheet.

Our goal is to estimate the stress in each link so that we can analyze our factor of safety. For this, we need the force on each component/link. The simulation gives us the force at each pickup point, and we can use it to define what is the force on each component itself. Different approaches can be used to determine the force on the component based on the pickup point forces coming from the simulation results so that the stress can be calculate. The table in Figure 4 shows the forces for each link in the suspension for all the load cases described.  The bars in the background denote the relative magnitude of force being applied on the link.  A bigger negative value (red bar) denotes a link under a greater compression force while a large positive value (green bar) denotes a greater tensile magnitude force.

We can now determine at what our worst-case loading will be for each of the suspension links. While this will not define the most likely suspension failure mode, since this depends on the material and dimension of the link, this will provide a strong indication of which link needs to be reinforced based on the suspension loading.

In this instance, we see that the worst-case compression loading for most of the links is the curb strike case in combination with cornering and braking.  Meanwhile, the highest tensile loads on the suspension links are regularly seen in the braking and curb strike load case on the front lower A-arm.  The maximum overall loading on the suspension was seen on the rear front link of the lower a-arm on the right-hand side.  Using the loads from here, we can now define what suspension link is most likely to fail. In order to determine the link would most likely fail first if the designed loads are exceeded, we need to define the geometry of each suspension link to determine how close it is to failure.

Figure 5 shows the geometry for each of the four corners of the vehicle.  While this car has been designed to handle being loaded in both left- and right-hand corners, the same tools used in the OptimumKinematics Forces Module can be used to define an asymmetric vehicle design if the car is only going to be loaded in one direction.

Note that the factors of safety chosen for this case study should be treated as examples, for each vehicle different considerations should be looked at including material variation, accuracy of load magnitudes, fatigue, and more.

Figure 7 – Margin of the Factor of Safety for Each Link

In the table shown in Figure 7, the color red denotes a smaller margin to the factor of safety for the component relative to the other load cases for each suspension link.  For each row, the boxed value denotes the link that is the closest margin to zero within the given load case, meaning that it would be the most likely link to fail if a more extreme situation like the defined load case occurred.

According to the analyses, the front right corner is the most likely link to fail for most of the load cases, with the left rear corner being the other most likely link to fail.  Overall, the most likely failure for this suspension will be the left rear tie rod when the suspension is loaded under braking with a curb strike or the left rear lower a-arm within the cornering, braking, and bump load case. Depending on whether the failure mode is acceptable to the designer, the geometry can be adjusted such that a different component becomes the main failure point.

Based on the results coming from simulations of the Forces Module within OptimumKinematics, we are able to determine the suspension link design based on the contact patch forces. A design team can determine the forces in their worst case load paths, find out what are the forces at each pickup point using the Forces Module, and minimize the likelihood of a part failure.

Instead of doing manual structural calculations as shown, the pickup point forces coming from OptimumKinematics can be used as inputs in your FEA structural simulations, with the Forces Module becoming a powerful tool in aiding you define the external forces in each component in your structural simulation.

Using the Forces Module in OptimumKinematics, designers can now move into the structural optimization of components quicker than ever before and with the reliable tools teams and industry members have come to rely on from OptimumG.

There are no upcoming seminars at this time.